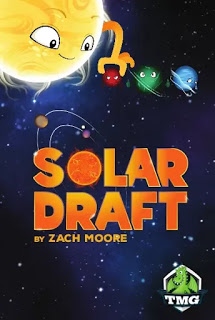 Publisher:  Tasty Minstrel Games, 2019
Players:  2 – 5
Time:  20 – 30 Min.
The theme of Solar Draft is for players to build a better solar system
than their opponents.  The deck of cards
comes with planets in three sizes and four colors, numerous moons, and lots of
comets.  The key to success is getting
the planets, moons, and comets aligned to score the most points.
Solar
Draft is quick to and easy.  A player’s turn consists of either adding a
card from the 5-card solar row to their hand or playing a card from their hand
to their solar system.  Every planet,
moon, and comet card have verbiage on it that explains the benefit or scoring
opportunity for having it in a player’s solar system.  The cards are easy to understand.  Cards must be played left to right with the
first card being a planet.  Moons go
above a planet and comets are played between planets.  Game end is triggered when a player places
their eighth planet card in their solar system.
One of the most critical actions is go to the workshop.  There players can recruit apprentices and
acquire buildings to be built on a later turn.
Some buildings require certain types of apprentices to be hired before
they can be constructed.  Players will go
to the workshop many times.  Yes, workers
can be captured from the workshop too, as well as from most locations.  The game flows back and forth with players gathering,
building, and capturing throughout.  Game
ends is triggered when a certain number of construction actions have been
taken.  These include both the
construction of players’ buildings and contributions to the cathedral
construction.  Points are awarded for
buildings, steps on cathedral construction, and either plus or minus points
depending on a players’ positive or negative position on the virtue track.  The player with the most points wins.
The first step in final scoring is to award each colors’ planet 5-point bonus
card to the player with the most planets of that color.    Next count the points accumulated on all cards
in a players’ solar system, plus all additional scoring for adjacency or order
in the system, etc.  The player with the
most points wins.
Solar
Draft is quick and easy while still causing players to
pause for just a little to decide which card to draft and when to draft it.  The art work is humorous.  The game play is engaging and we find the
scores are usually close.  This is a
really solid small box game.
~ ~ ~~ ~ ~~ ~ ~~ ~ ~~ ~ ~~ ~ ~~ ~ ~
Continue to check in for the latest in
board games and jigsaw puzzles.
~ ~ ~~ ~ ~~ ~ ~~ ~ ~~ ~ ~~ ~ ~~ ~ ~
Located at 30 NW 2nd Street in Historic Downtown Gresham.
We have a full range of family games, strategy games, Euro-style games,
war games, card games, dice games and more. Also for the puzzle
enthusiasts we carry quality jigsaw puzzles from Ravensburger, Cobble
Hill, Pomegranate, New York Puzzle Company, White Mountain, and Dowdle.